Creativity and Being Unique

We’ve previously written about copycats in Tango. And we will write in the future about our thoughts on the slowly brewing Tango norm: “Estilo Mundial” (This is a randomly chosen video and they ALL look the same!?). For now, we wanted to delve into what we think about being “creative” and “unique” when there is such a HUGE stress on it in Tango.

How about this: Just be yourself.

People constantly complain about clones and when they do so, there’s an unspoken/unwritten assumption that the person should be “unique” instead. By definition, each one of us is unique – hence the term “individual”. However, we are all humans.  We are all one. We share more things in common than not (“Hug a stranger today. If you go back far enough we are all related somehow.”). So why do we have to try to be so different?

Don’t get us wrong, we aren’t interested in being clones. We’ve never really been sheep.  In childhood, Jorge only had whatever his mother could afford. This, of course, meant brand names rarely existed in his home. Plus he was a ballroom dancer. That’s not quite what teenage boys are usually getting into at that time in their lives. Meanwhile, K specifically fought against going with the norm her whole life. She purposefully avoided many fads: desert boots and Converse in the 80’s, George Michael and belly button rings in the 90’s, and cell phones in the 2000’s ;) HOWEVER, it didn’t mean she flipped to the other extreme to be “unique”. Being “unique” is really just a timeless FAD. Why aren’t people happy to just be themselves?

Yes, we need innovators in the world.  We need people who push the envelope and challenge themselves and others.  However, Tango evolved (slowly) as dancers sought to challenge the dance ever so slightly and/or stumbled accidentally upon better and more efficient ways to move. We don’t believe there was a goal in mind to be super creative or unique, or an effort made to change the dance. Those who sought to change the dance (quickly), by being “unique” and “creative”, are those responsible for Nuevo Tango and other versions of Tango (which are not, as many people would like to have us believe, a “style” of Argentine Tango).

By being yourself, you are being all you need to be in life and in Tango. 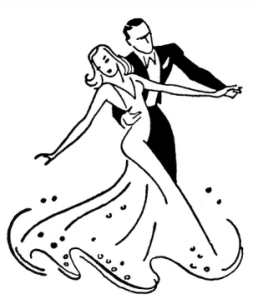 In Toronto, those ballroom studios who teach Argentine Tango (and most of them do since it is all the craze) have instructors who have never set foot in our city’s milongas!? Plus they offer this definition of Argentine Tango (which we stumbled upon on the Arthur Murray Dance Studio website):

“Argentine Tango: (arrabalero) A dance created by the Gauchos in Buenos Aires. It was actually an attempt on their part to imitate the Spanish dance except that they danced it in a closed ballroom position. The Tango caused a sensation and was soon to be seen the world over in a more subdued version.”

The history of Tango is a blur and that seems to be the only historical guarantee. The other guarantee is that Argentine Tango is NOT danced in a closed ballroom position. A reminder of the difference between a hold and an embrace can be found here.

The embrace or “el abrazo” in Tango is really a hug.  And just like a hug, it is made up of more than just arms and chests/torsos.  The embrace also includes the head.  When you hug someone, really hug them, your heads will touch and you will be in a cheek to cheek position.  Of course, this will not be the case if there is a disproportionate height difference or you use an open head position.

Some people say that having an embrace where the arms are nearing shoulder level (for the man) is very “ballroom”.  We definitely don’t agree with this statement.  We previously wrote about being concerned before our Buenos Aires trip that our posture and embrace would give us away as ex-ballroom dancers.  Yet no one commented on it and we were, in fact, often told that we look/dance “muy milonguero”. You need only look at some of the best milongueros (past and present) to see that they dance(d) with “high” embraces.  As examples, the milongueros Gavito, Vidort, Osvaldo Cartery, and Jorge Garcia all dance(d) with their left arms high up and they definitely do not look like ballroom dancers. 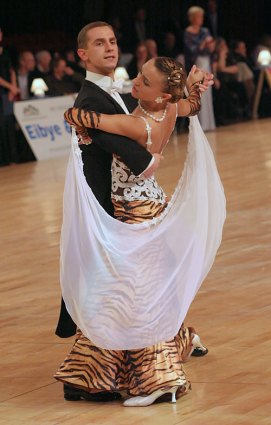 What really looks and feels like “ballroom” to us is if there is a lack of contact between the heads.  Ballroom posture is all about keeping the top part of your body (from the sternum up) away from your partner.  Even in a toned-down social posture, the heads are absolutely not supposed to touch.  However, in Argentine Tango, whether cheeks are touching or a chin is in contact with the top of the head, head contact is ‘muy importante’ and the cherry on top.

One Dance for Another

Many tangueros speak of all they have given up in order to dance tango and how everything revolves around the dance – more than any other. Overall, it was the opposite for us. Having been competitive ballroom dancers, we actually spent more time dancing and practicing, spent more money (memberships, competitive outfits, private lessons, practices, competitions), and we were all-consumed by it. We didn’t read tango blogs – instead we researched our competitors, looked at competition photos, and shined our trophies (kidding ;) We traveled around the country competing and had we continued to live and compete in Finland, we would have begun traveling throughout Europe to compete. For us, dancing tango meant we had more free time than we’d ever had and more money … well in the beginning anyway.   Then the privates started.  -We are still aghast and disgusted by the fact that Tango teachers charge more for privates than National Ballroom Champions who are experts in FIVE or TEN dances rather than ONE and have generally danced far less time (not including any milongueros).-  Then the shoe fetish began.  Then the extra group classes we wanted to attend.  Then all the milongas and practicas… and finally, the plan for a pilgrimage to the Tango mother land.

Now, we breath and live Tango.  We listen to the music almost all the time (there wasn’t a chance we would have listened to Ballroom music all the time), we watch youtube videos, we read blogs, and  generally have Tango on the brain.  Whereas some people have difficulty adjusting their lives (friendships, etc) to this new love, it was something we were both used to doing with other dances.  We LOVE dancing and dancing has always been a passion for us.  Now that we have Tango, the passion has deepened and we feel the culture of Tango within us.

We couldn’t be happier that it all turned out the way it did.

Finnish Tango is yet another misconception of Tango that we feel the need to clear up.  Jorge is Finnish and lived in Finland until he was 22 years old.  At which point he moved with K to Canada in 2005.  K lived in Finland for just under five years working as a kindergarten teacher.  While we lived there together, we enjoyed going out to dance socially to live music in the dance halls (inside and outside).  At these places, many dances were danced including Fox Trot, Quickstep, Slow and Viennese Waltz, Jive, Rumba, Cha Cha, Humpa, Jenkka, Polka, Samba, and FINNISH TANGO.

Being from, and having lived in, Finland causes many people to ask us about the large tango scene that exists in this tiny country.  Many people who dance Argentine Tango mistakenly believe that Finns are dancing some form of Argentine Tango.  This is somewhat understandable given that Wikipedia says Finn, “Finnish tango is an established variation of the Argentine tango“…How misleading!  Yes, there is a very large tango scene in Finland, but Finnish Tango is just that:  Finnish Tango.  It is not Argentine Tango and does not resemble Argentine Tango in any way.  In fact, it mostly resembles ballroom tango, as does the music.  At a minimum, the majority of the population can dance Viennese Waltz (they learn to do so in school) and in general they can all dance tango as well.  At its most basic form, Finnish Tango involves moving to the music and not much more.

When Argentine Tango is danced in Finland, it is completely separate of Finnish Tango.  Not unlike many other Argentine Tango communities outside of Buenos Aires, Finland has a small A.T. community that dances to Argentine Tango music.  If someone wants to learn A.T., they go to classes specifically for A.T.

For a taste of the (rather depressing) sounds of typical Finnish tango music, take a listen to Mikko Kilkkinen, the Tango King winner of the 2002 Seinäjoki Tango Festival:

As further proof that Finnish tango, the dance, has more in common with ballroom tango, we can let you in on another dirty secret of ours.  We were actually in one of Mikko’s music videos with another young ballroom couple.  The four of us danced our ballroom tango choreography to his song.

Finally, you can watch this video of a couple dancing Finnish Tango:

This is a much more elaborate version of the dance and you will rarely see the general public dance it this way.  Therefore it should be pointed out that this couple used to dance International Competitive Ballroom and probably still teach it.  In fact, they used to teach Jorge when he was a child!